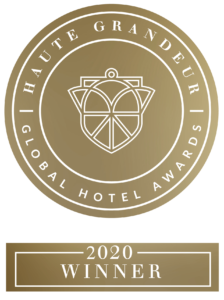 Each year, top luxury hotels, spas and restaurant brands vie for the ultimate accolade in overall excellence. Only the best of the best is awarded for exceptional achievement and greatest contribution to the global luxury hospitality industry.

“The industry is highly competitive. Only those who constantly exceed attain prestige,” says
Haute Grandeur Global AwardsTM Founder and President, Marinique de Wet. “Healthy competition is essential to inspire excellence because it ensures sustainability in an industry that globally create so many jobs. Association
with Haute Grandeur guarantees participating establishments status and distinction. We are proud to contribute annually in raising the standards of excellence in hospitality worldwide.”

“The Awards inspire even greater success in already remarkable hospitality establishments and set a new standard of excellence,” says De Wet. “The Haute Grandeur Global AwardsTM is more than just a celebration of our dignitaries’ achievements. It honors the principles of hard work, commitment, determination, leadership and success. More than ever before, recognition helps teams to remain positive and goal driven.”

“To win a Haute Grandeur Excellence Award an establishment must excel on all levels”, says De Wet. “Haute Grandeur Global Awards are recognised as a guaranteed golden stamp of excellence, with associated establishments perceived as the benchmark in the industry. By awarding only the most remarkable, Haute Grandeur Global AwardsTM inspire already exceptional hotels, spas and restaurants
to achieve even greater heights. The 2020 season’s winners have truly attained the ultimate in excellence, recognized with the highest accolade.”

Pondoro was the recipient of not one, but 4 awards:

Please vote for us